Our Hexa moments captured on the off road track …

I was feeling rather down in the dumps after I did not make it to the final sixty sponsored by IB for the grand Hexa Hyderabad affair and did express my discontentment on IB’s forum, little realizing that the Bengaluru version of the razzmatazz would happen in a couple of months. So when the invite came,

IndiBlogger and Tata Motors Limited invite you to join in and experience the Hextraordinary!

With a host of Tata brands coming together at the ‘Hexa Experience Centre’, you can fully experience the power-packed, feature loaded and adrenaline pumped Hexa. The 3 day event promises an off-road track, entertainment, shopping, a kids play area, refreshments and an all-round hextraordinary day!

I jumped at the offer and chose Saturday the 24th for the ‘hexotic’ experience!

The ad on Indiblogger page about the bash was different from the usual with the event spread over three days and the programme included the unmatched and incomparable best in class Hexa off road and test drive experiences, game zone for kids, refreshments, live music and Pet adoption. Well, one can figure out the first four programmes line up in the event but the fifth item took me by surprise – what has an animal shelter got to do with automobiles??? Believe me when I say that anything is possible from the house of TATAs and when they decide to give back to the society, they do it in abundance and altruism is their second name.

I read the programme aloud for the sake of my family as it was mentioned that it could be a fabulous day out at White Orchid, adjacent to Manyata Tech park in Nagawara in Bengaluru, my sons’ ears perked up like those of dogs and I mistook their excitement to the eagerness of laying their hands on the magnificent Hexa! But they had other plans as well, which were covertly discussed and I was woefully unaware of their clandestine intention!

Some messages popped up on the group whats app page about the timings and other trivialities and soon I discovered that it was a 12 to 6.30 affair with registration counter up and running at 12 noon. I zeroed in on a couple of IB buddies like Sheetal, Mayura, Kokila and Rashmi who would make it to the event on Saturday.

So my younger son tagged along enthusiastically but unfortunately the elder could not as his exams were scheduled that day and my hubby stayed back; however, there were lot of whisperings happening between the two while I sat guessing what it could be. The ride to the venue on the Vajra was a smooth one surprisingly without the usual traffic snarls as everybody seemed to be out of town enjoying their Christmas vacation.

We were there in an hour and a quarter, well in time for the registration and the charming Hexa team took us through the formalities of filling up the form for the off road experience and the test drive. The driving licence number was noted and we had the lovely tags to our wrists firmly in place.  I sighted the Indiblogger counter bang opposite the registration centre and I displayed my Indipass to the representative to check in and confirm my attendance. That over, we sauntered around the stalls that sold some of the exotic jewellery from the house of Tatas, the Chroma store with the best electronic gadgets, a magnificent kids play area that had a sensor game, a large fishing game and other target game zones, a Dunkin Doughnut stall and a Tata Global beverages outlet. But what stood apart was the imposing opulent beauty called Hexa in an Arizona blue that literally towered over the rest. It cut a dash with all the visitors who were attracted by the aura and grandiose and swarmed to it like bees to a honey pot. My son gleefully sat in the driver’s seat and his expression said it all, he felt like a man and the mean machine had indeed hypnotized him and the otherwise camera shy guy was only too eager to be snapped in this pose!

We checked out the impressive and splendid exteriors dominated by the signature impact design that had dual coloured bumper with the trademark Tata grille accentuated with chrome humanity line. The ice cube patterned day time running lights harmoniously fused with the fog lamps. The contours were striking and the Hexa was encased in absolute aggressiveness. The rear was also a delight with the twin exhaust adding to the tough exterior look.

The interiors were simply mindboggling; the ambient shades of light enhancing the indulgent seating in contrast stitching styles, the console was not cluttered but displayed elegantly the infotainment system with 10 speaker system strategically placed across the vehicle, screen monitor to display the various applications, the instrument cluster which showed advance driver information, drive modes such as automatic, comfort, dynamic and rough, among many other brilliant state of the art features. We explored the dynamite from every possible angle enhanced by the subtle and soothing music performed by various artistes.

We also experienced the virtual driving app that took us through the length and breadth of the adrenaline pumping SUV! The announcement to proceed to the off road track blared on the PAS and we entered into what looked like an amphitheatre, an arena where the mighty beasts were kicking up a storm.

We were ushered into one of the 7 seater 4×4 2.2 litre majestic power houses and the skilful and adroit driver was eager to show off the tamed beast that had a max power of156 PS@4000 and an unbeatable torque of  400Nm@1700-2700  ; my son occupied the strategic front seat while I sat in the Captain’s seat ready to capture the heroic drive. The 6 speed manual revved up ready to clear all hurdles aided and abetted by the ground clearance of 200mm, ESP with traction control system and the next few minutes were sheer delight.

It effortlessly climbed the steep gradient and also slid down with absolute control, thanks to its rough driving mode with ascent and descent controls that took care of the inclined plane at about 30 degrees and the sharp descent too. The coil spring suspension ensured that the vehicle went over the ridges with utmost ease and dexterity and the Electronic Stability Program kept the big body in absolute control in a 40 degree sideways tilt! The traction feature is a fantastic add on that makes the Hexa win hands down over its competitors.

The torque driven SUV then thundered down 450mm of water and for a moment I was in an water theme park.

The sublime colours add magic to the silhouetted beauty and the six variants with both automatic and manual versions bring in a fresh of breath air! The rugged sporty appearances both from the inside and the outside speak volumes about the zesty and domineering category and segment it is placed. It is a show stopper that will make all heads turn and the Tata motors has with the Hexa brand under its belt, carved a unique niche for itself with an unbeatable price that will definitely give other car makers a run for their money. The brand Hexa will undoubtedly pip everyone at the post with its features that are a class apart!!!

The conglomerate called TATA right from its inception is known for its philanthropy and giving it back to the society and I had the privilege to write on them in this post.

In an event that showcased the compelling and commanding car, was an overwhelming gesture exhibiting the altruistic nature of the corporate giant in the form of pet adoption. In a bold and benevolent gesture, it associated itself with CARE which proudly displayed rescued animals in the event and as the cute and cuddly dogs and cats marched in to their cosy kennels, my son’s joy knew no bounds and I realized that this was the moment he was waiting for. Just like the adrenaline pumped hexa astounded the visitors, these abandoned, abused and traumatized animals that found guardian angels in the loving hands of CARE enticed my son and he was stimulated and thrilled beyond words. It reckoned to me at that instant that this was the surreptitious conversation that my sons had indulged in- to adopt and give a fresh lease of life. This is precisely the way the ball bounces and serendipity brought us to the two black and white adorable puppies and within the next two minutes, we were the foster parents! Santa was truly magnanimous this Christmas!!! 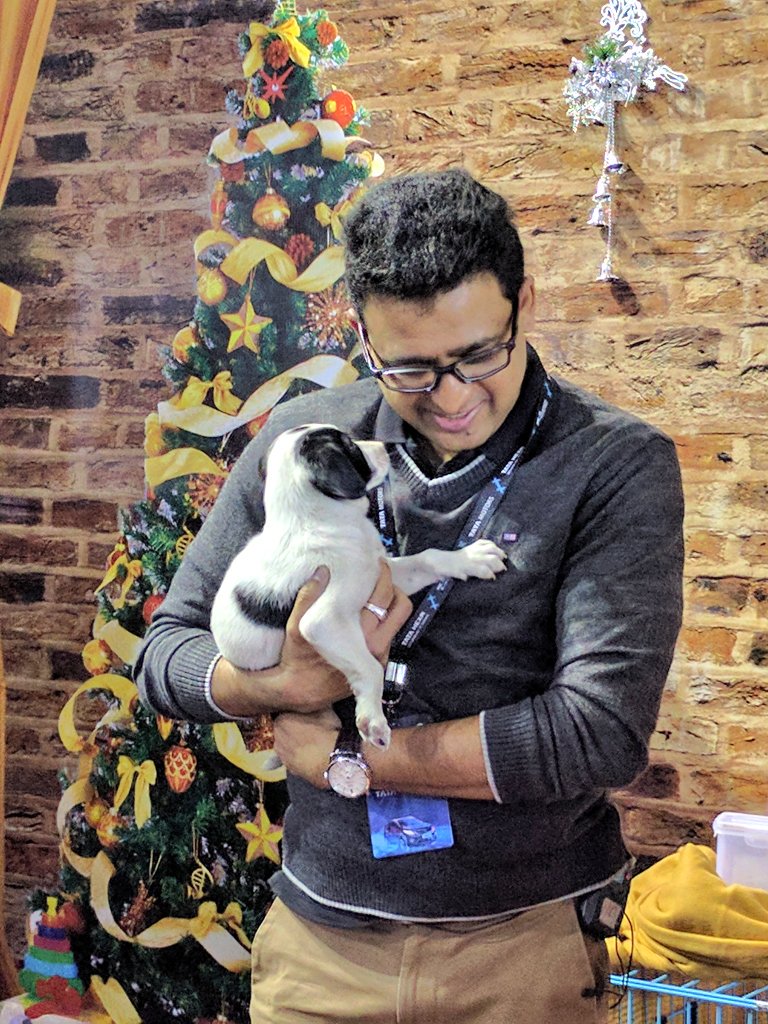 Mr.Vivek of team Hexa with one of the puppies adopted by us – courtesy his twitter page

The forms were duly filled in and all other adoption protocol was duly and faithfully carried out. We had to visit the shelter to officially bring home the two puppies baptized as Buddy and Candy! A tete a tete with Sudha Narayanan, the trustee of care revealed that Tata Motors was supporting their cause genuinely and were gifting the foundation with an ambulance. She also disclosed that CARE, expanded to read as Charlie’s Animal Rescue centrE was named after Charlie, one of the first therapy dogs that helped in providing succour to the differentially abled children.

IB paved the way for a day that ushered in joy, ecstasy and compassion with an “hextatic”, “hextraordinary” and “hexuberant” Tata Motors family!

33 thoughts on “Hexa and the joy of adoption!”