The dawn of a milestone, though age may be just a number and there is never a grand celebration of birthdays, I thought it prudent to take time to introspect and reflect on the people around me. It brings in a reason to delve into nature’s alignments and their pay offs! It has become imperative to show our allegiances to the exalted natural order of Matha, Pitha, Guru, Deivam as our culture and tradition demands, maybe not necessarily in that order and not exhaustive as well! A whole gamut of people from different walks of life has a tremendous impact on our lives, to look up to them, to learn from them or who are iconic figures with sublime and lofty ideals.
There cannot be a better and apt moment to contemplate, articulate and make a sincere attempt to write a small tribute on a leader who stands tall, a charismatic person who has broken the glass ceiling to lead an institution to great heights and glory, a lady who inspires and influences and has a compelling vision and foresight.
Dr. Shikha Tiwari, the Principal of T John College in Bangalore is the woman of the moment as she has been featured by Forbes magazine in the 2019 May issue as Top 100 Best Peoples Manager, a noteworthy achievement that was no mean feat! 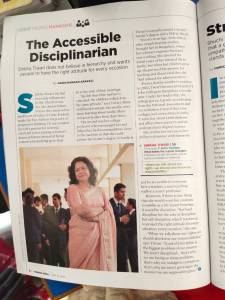 An erudite scholar in Hindi and Sanskrit, with a master’s in Sanskrit and a doctorate in Hindi, Madam has in a span of about 15 years, risen to this position due to sheer dedication and commitment. She has become an inevitable part of the institution, a dynamic force to reckon with and a harbinger of inspiration.
I have known her for about three years which may be a short period of time for any deep rooted association but all the same, to be under the wings of a person of this calibre does give me a position to write about her prowess.
Initially, I maintained a stoic distance due to the fact that the responsibility bestowed upon me did not call for any direct and frequent interaction with the Principal’s office. For about a year or so, there existed a firewall between the two of us and I did not make any effort to understand her at close quarters maybe because of my disposition. I have been a watchful observer from the sidelines on how she carried and conducted herself. I knew she was passionate about her job and very much concerned about results that provide visibility to the organization. I saw her as a tough task master and would never take any half hearted attempt at anything in the work place. She minces no words and acts tough at the smallest of mistakes as she expects a flawless performance from everybody. Early in my career at T John College, I did come in the line of fire for dereliction of duty and faced the wrath from her and was pretty miffed at being handed down a memo. It is not too easy to take it in one’s stride even if one is completely at fault and so it took me a while to get up, get going and rectify my defects. I realized that she is a stickler for perfection, somebody who goes fervently by the rule book and firmly believes in following the protocol. An idealist, she cannot tolerate even a small deviation from standards that are set and each time without batting an eyelid, the bars are raised and we end up striving farther, harder and stronger.
There have been couple of other skirmishes for which I was hauled up and admonished but by then, I was able to come to terms with her unyielding quest for impeccable outcomes and eventually measure upto her expectations. Gradually, the bond between us grew stronger and I became comfortable working in an environment that brought out the best and propelled us to work against challenges. A staunch believer in conscientiousness or self regulation of behaviour, Dr. Shikha managed to inculcate the habit of good conduct, discipline, punctuality and control. Mastering the fine art of balancing with command and compassion in equal measures, she became an able administrator, a friend, a guide, a philosopher, a mentor and a fine teacher.
She excelled in the art of delegation and I always marvelled at her ability to know the strengths of each of the members in her team and allocate tasks and responsibilities accordingly. She greatly acknowledged my oratory and writing skills and was liberal in showering encomiums whenever she got a reason to and I was often humbled and honoured by her open appreciation. On many occasions, she has created favourable circumstances for me to showcase my talent and I am forever indebted to her for the opportunities extended to me.
I am given to understand from the stalwarts in the organization that she has weathered many a storm and when the winds tried to blow her away, has adjusted her sails successfully to charter the rough seas. She has stood firmly for conviction and the doctrines handed down from the management of the institution have been faithfully executed and implemented.
Credited with a lot of best practices specifically the huddles on a daily basis with the heads of the various departments that creates a perfect ambience for sharing of information, debriefing on the status of tasks, discussion on problems and highlighting on accomplishments, Shikha madam has indeed taken the educational sector by storm. Through this networking and collaboration, a sense of bonhomie is created that drives an organization towards its goals effortlessly and seamlessly.
An orator par excellence, fluent in Sanskrit and proficient in Hindi, her talks have always been motivating and insightful. These powerful speeches have impacted lot of students to perform and excel. An uncanny knack to hold the rapt attention of the students during her Hindi classes is often the talk of the institution and the students flock to her classes like bees to flowers. However, the strict disciplinarian that she is, the students simply do not dare to be indifferent or laid back, callous or lethargic!
The insistence on perfect grooming and immaculate dressing may have drawn flak from the student community but she was undeterred by the brickbats and stands her ground firmly and ultimately these very students realized that this has paid them rich dividends for campus placements and recruitments and also in life.
She wears many hats and the passion to write beautiful poetry is one among them and probably this has helped her remarkably to de stress and gives expressions to her thoughts.
Her never give up attitude and alacrity to boldly understand and interpret things remains the high point of her character. Her never say die demeanour with an absolute sense of belongingness have put her in a high pedestal of life and the latest award is just another jewel in the crown in her illustrious career.
It has been an exhilarating learning journey with her and on my 50th birthday, I dedicate this to Dr. Shikha Tiwari, one of the celebrations of life!

You would be eager to read the first part at https://adsunsri.wordpress.com/2016/05/02/smilestones/